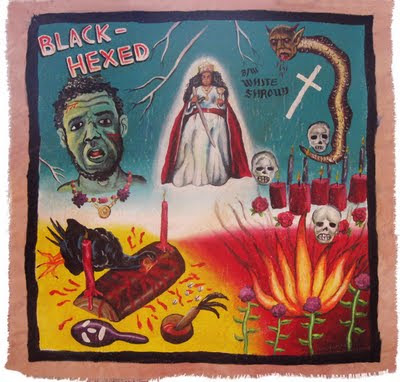 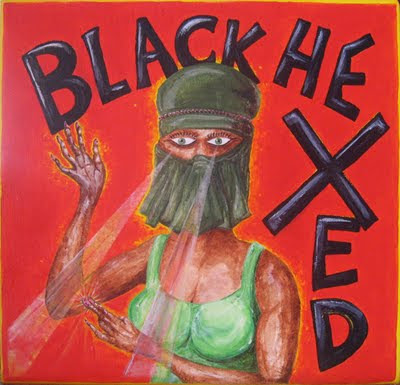 My fellow artist/musician and good friend David Thomas and I have been pushing each other to take our creative minds out of the proverbial shitter and get goin' on some new work, visual and otherwise. We've kinda been giving each other assignments to keep ourselves motivated and excited about doing our art.

A few weeks back, I went to see the exhibit entitled "Movie Mojo: Hand Painted Posters from Ghana" with David. We had been talking about utilizing the exhibit as a springboard for some new paintings, so we decided to paint our own renditions of these Hollywood-gone-voodoo spectacles of violence, monsters, transfigurations, and frenzied religious symbolism. The catch was, that instead of painting an image for a movie poster, these paintings would be specifically created to function as a 7" single record cover for my solo music project tentatively-titled Holy Ghost. The painted image would be based upon the two tracks on either face of the 45rpm single in direct reference to or in essence of the song titles or lyrical themes.

After critiquing the two paintings we were both really happy with the results. Next step is to get this damn record released and really shoot for painting a lot more in the future! Hoping to have the two tracks mixed and mastered in the next few weeks and then get the ball rolling on shopping the material around to labels that would be interested in releasing it.

Please be sure to check out the exhibit at the Chicago Cultural Center as well David's amazing collage work, and the recent collection of long-forgotten material from his amazing band, DA! on Factory 25 records.