Progress on "Self Portrait With Death Playing Fiddle" 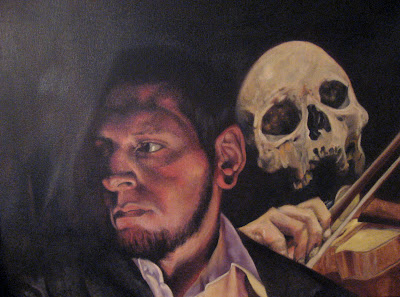 Still working on this piece. Ugh! It's giving me troubles, and it's so difficult to try and paint in adverse lighting conditions. It almost looks like a totally different painting when I move it into each room of the house, our lame-ass digital camera also makes it difficult to capture the warmth and depth of the image. Be posting more later as it progresses...
Posted by Unknown at 5:05 PM No comments:

The Art of Francesco Parisi 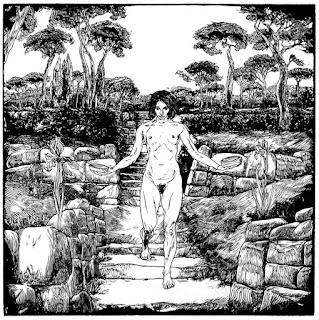 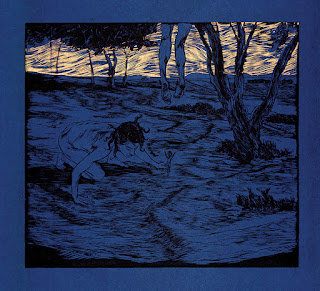 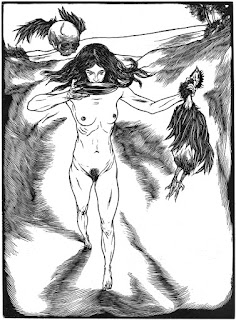 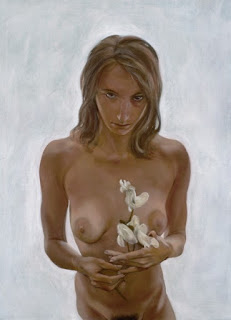 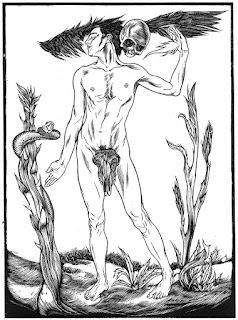 Text and images reposted from one of my favorite publishers of esoterica, Fulgur Limited. Many Thanks!

Biography
Francesco Parisi was born in Rome in 1972. He studied at the Accademia di Belle Arti where he first encountered the works of William Blake and Francesco Mazzola. His first one man exhibition was during 1995, at the Gallery Guy in Paris. Later he returned to Italy and deepened his study of wood-engraving technique. In his paintings and engravings between 1998 and 2002 we see an exploration of the themes and subjects relating to Dionysus. In 2002 Emanuel Bardazzi curated an exhibition of Parisi’s prints at the Gabinetto delle Stampe of the Galleria Comunale d’Arte Moderna e Contemporanea in Cagliari. In the same year he gained a grant for engraving at the Kultur-Institute Villa Romana Florenz in Florence – once the studio home of the German engraver Max Klinger. Between 2001 and 2004 personal exhibitions followed in Italy and abroad.

In 2005 a catalogue raisonné of Francesco’s engraved work was published, edited by Arianna Mercanti and with a preface by Maria Teresa Benedetti. In 2006 the artist moved to New York for one year where he taught wood-engraving technique at the Centre for the Book Arts, while preparing for an exhibition at the Caelum Gallery.

Francesco writes regularly and is the author of essays and articles in specialised magazines and catalogues on Italian and European graphic art of the early nineteenth century. He has curated national exhibitions and written accompanying publications for museums and private art galleries in the Italy. His prints may be found in the collections of the Bibliothèque Nationale de France, Département des estampes et de la photographie, Paris; the Royal Museum of Fine Art, Antwerp; and the British Museum, Departments of Prints and Drawings, London. He is currently Professor of Printmaking at the University of Fine Arts, Rome and at Accademia di Belle Arti di Foggia.
Posted by Unknown at 6:07 PM 1 comment: 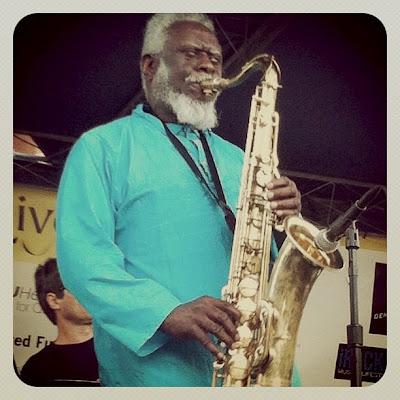 I was very happy to experience a very special live performance from one of my favorite jazz artists of all time this past Sunday night, Pharoah Sanders! It was a perfect evening for such an outdoor event with the weather cooling down to a very comfortable (finally) mid 70's, the smell of smoke mingling with the sound of the rushing waves on the beach outside of Chicago's South Shore Cultural Center. A very fitting atmosphere for one of Jazz music's most spiritually uplifting players.

Glad to see he's still getting around after 50+ years performing (he began playing alongside John Coltrane in the 60's and was given his nickname "Pharoah" by Sun Ra!). He even did some amazing little dance shuffles and a vocal performance on my favorite piece "The Creator Has A Master Plan". My wife and I had a great time relaxing on our blanket and soaking up those vibes. Unbelievable energy!
Posted by Unknown at 3:55 PM No comments: